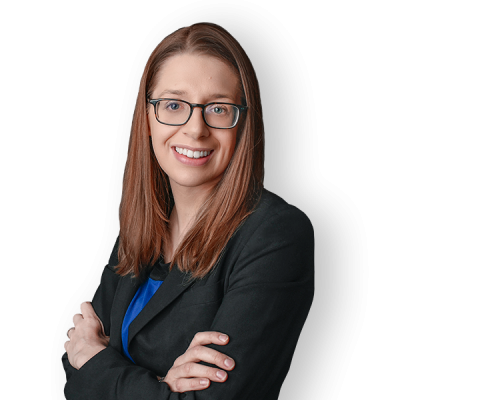 Lauren is a partner at Carbert Waite LLP. She obtained her J.D. from the Schulich School of Law at Dalhousie University in 2011. Previously, she received a B.Sc. in Earth Sciences from the University of Calgary in 2008. Lauren commenced her legal career with a firm in Halifax and was called to the Nova Scotia Bar in 2012. She continued to practice in Halifax until she joined Carbert Waite LLP in 2014.

Lauren’s current practice is in general civil litigation, with a focus on employment, human rights, health, and personal injury law.

With respect to her employment practice, Lauren regularly advises both employees and employers on human rights issues and on all aspects of employment, including terminations of employment, harassment, disability issues, workplace policies, employment standards, disciplinary issues, and occupational health and safety issues.

In the area of health law, Lauren represents health care institutions and other health care professionals on various issues, including in medical malpractice defence.

In addition to the above, Lauren has also represented clients in collective bargaining, before labour boards, and at arbitrations, conciliations, and mediations.  Lauren also has experience in matters related to labour law, professional regulations, administrative law, and pension/benefits law.

Lauren has appeared before the Federal Court of Appeal and all levels of courts in Alberta, as well as before the courts in Prince Edward Island and Nova Scotia.

Employment Law is ever changing. Just when we think we have a good handle on how a court will decide an issue, a court releases a decision that revises previously settled law or governments change legislation. Because of this, it is dangerous to rely on old templates for offer letters…

#Metoo Has Come to my Workplace, Now What Do We Do?

Allegations of sexual harassment are serious and employers should investigate them promptly. Even when no specific complaint has been made, but there has been gossip or murmurings of inappropriate behaviour, employers should probe the issue and not wait for a formal complaint.

In Wilson v. Atomic Energy of Canada Ltd.[1] the Supreme Court of Canada provided a critical clarification to the “unjust dismissal” provisions in the Canada Labour Code (the “Code”).[2] The Court ruled that the Code prohibits federally regulated businesses and organizations from dismissing most non-unionized employees without cause subject to…

Your employer has laid off many of your colleagues; but not you. Instead, your employer informs you that it is cutting your pay, increasing your hours, or changing your job duties. What options do you have?

Navigating the Complexities of an Employment Termination

In the past few months, we have heard many stories of both large and small companies located in Alberta laying off substantial numbers of employees. In this uncertain environment, it is essential that both employees and employers alike understand the legal principles surrounding employment terminations. Failing to do so may…